Masonic youth organizations are separate and independent organizations that stress the importance of character development, community service and leadership. While members of the youth groups are free to seek membership in Freemasonry or the Eastern Star, it is a personal choice and not a requirement of membership in a youth order.

While there are several youth organizations sponsored or supported by the various Masonic organizations, three are the largest and best known. 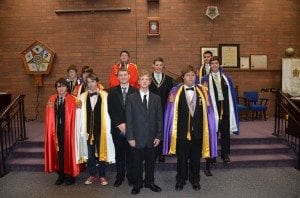 The Order of DeMolay is an organization for young men aged 12 to 21. Young men do not need to have a Masonic relative to join the organization. DeMolay was founded in Kansas City, Missouri, in 1919, and is now international in scope. Like the other Masonic Youth Orders, DeMolay Chapters (local groups) usually meet in a room at a local Masonic Lodge. Adult leadership is provided by men (usually Masons) known as Chapter Dads or advisors. The Order takes its name from Jacques DeMolay, the last Grand Master of the Templars, who was martyred in the Middle Ages for refusing to compromise his honor. The Order teaches the virtues of reverence, love of parents, comradeship, patriotism, courtesy, cleanness, and fidelity. The Order provides many social events and activities, which help to teach social skills and leadership. 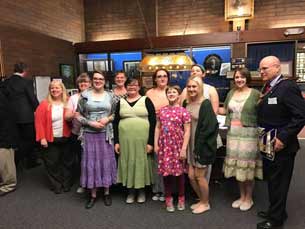 The International Order of Rainbow for Girls is an organization for young women aged 11 to 20. It was founded in McAlester, Oklahoma, in 1922. No relationship to a member of the Masonic Order is required for membership. Local groups or Assemblies are generally sponsored by either a Masonic Lodge or a Chapter of the Order of the Eastern Star. Women known as Mother Advisors give adult supervision and guidance. Each of the colors of the rainbow is associated with a particular virtue or source of inspiration. Like the other Youth Orders, Rainbow is deeply involved with local charity and support of education. It teaches character development, planning, leadership, and social skills through training programs and social events.

The International Order of Job's Daughters takes its name from a story in the Biblical Book of Job. It was organized in Omaha, Nebraska, in 1920. Membership requires the young woman be related to a Mason. The local organization is called a Bethel. The teachings of the Order are Biblically based, and similar virtues are stressed as in the other Masonic Youth Orders. Job's Daughters places special emphasis on community service. Many Bethels work with drug education programs and with the Hearing Impaired Kids Endowment (HIKE) Program. Membership is for young women age 10 to 20.